What is the
Meaning of Life?

Nearly three decades into this life, I discovered that I was the victim of distorted imagination, living in the story of what happened in my life. Regardless of the havoc it caused, living in the story fueled my insecurity and validated my excuse for the perpetual failures I encountered. This story depleted me of all my life force energy. As a result, I defined myself by the failures, circumstances, and negativity of my past. I further discovered that my lack of awareness did not override or excuse the pain or discomfort associated with those events. My story started when my view of the world was completely shattered at the age of nine, when the adults I considered as my protectors, ended up taking my innocence by violating me through molestation. The dysfunction in my family offered no relief, and there was no one to turn to for help. At the young age of nine I developed a defense mechanism, a rule by which to live my life to keep me safe. I became hard, rigid, defensive, curt, retaliatory, angry, numb and lifeless. I lived as if the world was out to get me because, up until that point, it was.

Soon, I migrated to the US from Haiti with hope of the American dream that things would be better, only to have that dream shattered by the realities of my new-found situation. I was exposed to gang violence, drive-by shootings, drugs, and everything else a child should never experience. I became a teen parent with a vague understanding of parenthood, and later, a high school dropout on welfare. What was worse was that I was living the highest form of ignorance and did not know that I did not know that the mechanism I created as a protective system was actually working against me, deteriorating my life force energy. I developed a nasty disposition of being angry at everyone, especially “God” and the so-called superhero I had anticipated to rescue me out of my despair.

A distorted view of Life

I was letting defense mechanisms learned by my nine-year-old self define my present moment awareness and dictate my future possibilities. I was helpless, dejected and totally devoid of life. Whatever dreams and goals I had, seemed totally impossible and out of my reach. Does this story sound familiar on any level? If we’re honest, a lot of us have felt this way on some plane. If life was a game, I was set up for optimum ruin. No coach, playbook, life manuals, player highlights, or teammates. Certainly, no one to cheer me on, just me attempting to navigate life with my distorted view, struggling to stay afloat while my ambitions and goals grew further and further out of reach. Life had proved a failure for me.

Something happened though, while I waited for my hero to come and take me out of my misery, I realized that the hero I’d been waiting for, was there all along being overlooked by a preposterous ideal hero; It was me! If anyone was going to help me transcend my world, it was going to have to be me. My higher self – the one that I’d kept repressed by focusing on the negative events, seeking approval, acceptance and validation from others who were in the same predicament but masking it. It was inside of me, waiting to be let out, and it was the opposite of all the negative energy I’d allowed to define me.

I discovered that my higher self was the opposite of the self that fear, doubt, and failure had under siege. I was rather fierce, abrasive, powerful, brilliant, genuine, authentic, courageous, resilient, decisive, independent, motivated, self-starter, initiator, subsequently amazing with an innate ability to relate to others and offer solutions and healing to their problems. Although this list is a bit lengthy, it barely reveals all that I have discovered of myself. Not bad for a distorted poverty-stricken immigrant girl with a closet full of thorns and soil raiment.

The SuperHero Revealed – Me 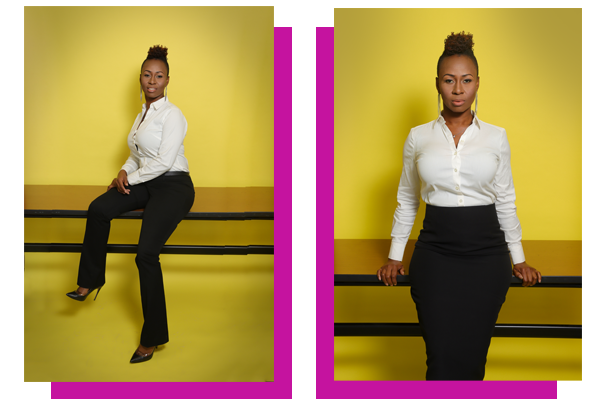 Today, I stand as a survivor of the distorted reality imposed by the world around me. I have transmuted all negative circumstances to that of exquisiteness; I’ve won! All it took was unlocking my true potential and possibilities, by realizing who I was and the power within to transcend my world and chart my course. I have since dedicated my life to bringing this same freedom to others through committed coaching and strategies that helps to unlock their potential. If your story sounds anything like mine, I have good news for you – there is a way forward and I want to take you there. Welcome to the beginning of your journey towards liberation and success. I’m glad you’re taking this step! Onward we go.

Recently, my passions have led me to launching The Chantale Milord Show, a talk show where I share encouragement and motivational tools that help viewers discover the secrets to success that they’ve buried with life circumstances and failure. The show is an extension of the messages I’ve shared through my podcast, where I feature guests and stories of transformation that inspire listeners through their own recoveries from past mistakes, pain, shame, heartache, and traumas. In addition, I’ve authored the forthcoming book “RESET,” which will provide Key elements to surviving life after failure in relationships, allowing individuals to further discover who they are and how to access their higher selves and live an exquisite life today.

Community is so important to me, and I’ve been fortunate enough to establish many non-profit organizations, including The Chantale Milford Foundation, the accredited K-12 preparatory school Grace Leadership Preparatory Institute, and Grace Behavioral Services. As a Master Life Strategist and Results Coach, I’ve helped countless individuals get over their self-defeating and self-sabotaging habits . My work has earned me various accolades along each step of my journey, including the President Service Award from the National Council of Negro Women and the Education and Humanitarian award from Carribean Today magazine.

When I’m not working, I can be found helping with community projects, writing, spending time with my family and friends, and most importantly “doing not doing”.  — Chantale